Uncharted doesn’t look good. Let’s be honest, the upcoming film adaptation feels like a half-hearted retread of the games’ greatest hits with Tom Holland and Mark Wahlberg filling in the roles of Nathan Drake and Victor Sullivan. We see moments from A Thief’s End, Drake’s Deception, and other games thrown into a caper which is seemingly pitching itself as something unique, but it’s hard not to dismiss it as something that will ultimately look and feel completely soulless.

I’ve thought this for months, until the second trailer came around and the evident campiness turned the tide, convincing me that perhaps this inevitably mediocre adventure might have something to offer if I approach it from the right perspective. It isn’t going to change the game, adaptations like this never do, but that doesn’t mean I can’t treat it as the tongue-in-cheek experience it’s designed to be and have a little fun with it.

Chances are it will probably still suck, but so does one of my favourite childhood films – National Treasure. Released way back in 2004, this swashbuckling blockbuster had Nicolas Cage working with a group of fellow treasure hunters to steal the Declaration of Independence all while being hunted by rival treasure hunter Sean Bean who was evil and willing to murder fools for his riches. He was a bad guy, and like all of his films, ends up eating shit before the credits roll.

The film is so ridiculous, and emerged before Nicolas Cage’s career devolved entirely into cheesy mediocrity designed to pay off a bunch of dodgy tax receipts. This man won an Academy Award, and now here he is rubbing lemon juice on historical documents to uncover a nonsensical treasure map. None of it makes any sense as they eventually venture into ancient ruins to uncover untold amounts of treasure, all while shooting baddies and engaging in romantic shenanigans that will have you cringe into another dimension.

It all ends with Cage smooching his new girlfriend as they walk into a manor conjured up from their riches, much like Nathan Drake and Elena walk off into the sunset after murdering thousands and dooming a lost civilization. All in a day’s work, and I would not be surprised in the slightest if Naughty Dog drew inspiration from this film alongside other genre classics to craft Drake’s Fortune back in the day, which for context released only three short years after National Treasure. It all makes sense now, Nicolas Cage is some form of Nathan Drake prototype, but with fewer homicidal urges and far worse line delivery. We still love him. I hope Tom Holland says something as stupid as “I’m gonna steal the Declaration of Independence.” 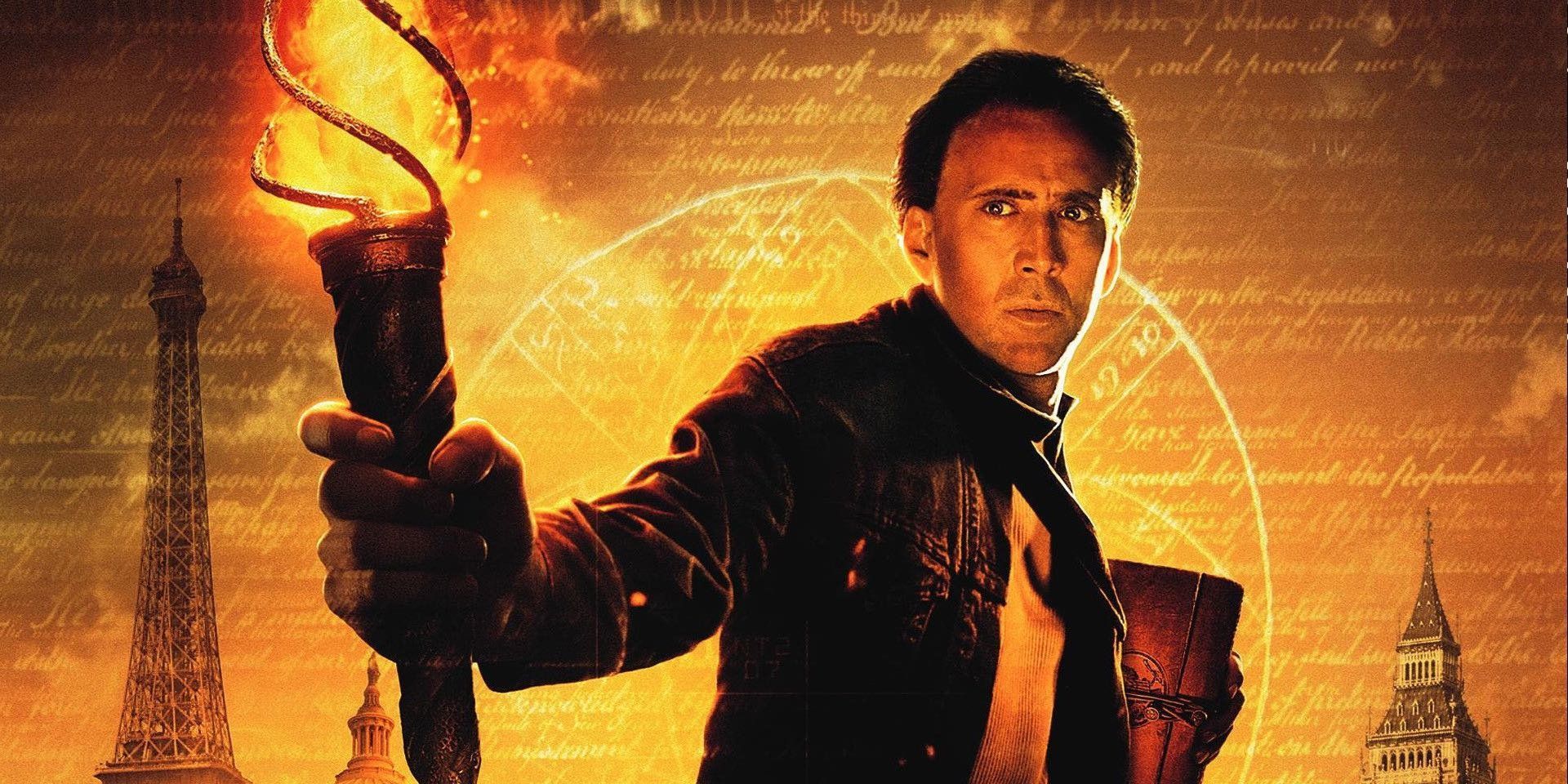 When you view the upcoming Uncharted film as a sibling to National Treasure it all becomes far easier to stomach. It’s an over-the-top globe-trotting caper that riffs on the series’ greatest moments for a rollercoaster ride that likely doesn’t care if it ends up being forgettable, evident in its recycling of set pieces and unusual interpretation of simple yet beloved characters. Holland is far too much of a twink to play Drake, while Mark Wahlberg is an awful, awful choice for Sully, but if they pull off their characters by even the smallest degree I won’t be too bothered.

This is a movie adaptation of a blockbuster game that really isn’t worth getting angry about. Don’t like it? Don’t watch it, and don’t give those who do a hard time because they’re indirectly bastardising a franchise that itself is already a bit silly. An Uncharted film probably doesn’t need to exist, but given the whims of capitalism and creative bankruptcy, it’s only a handful of weeks away from falling into our laps. Instead of demonising it as the coming apocalypse, I’m going to sit down and try and have fun with it. The games mean a lot to me and remain some of my favourites of all time, so if Holland can capture even half of that magic, we might be in for a surprisingly good time.

Related posts:
01/02/2022 Reviews Comments Off on The Uncharted Movie Is Just National Treasure And I Kinda Love It
Hot News
Best Music & Rhythm Games On Quest 2: Beat Saber & More
How AI will drive the hybrid work environment
File Size For Kirby And The Forgotten Land Reveals Its The Biggest Kirby Yet
Evil Genius 2: Guide To Side Stories
Skyrim Player Captures Real Arrow In The Knee Moment
Recent Posts