Amazon this week walked into the health gadget market with a $100 fitness wearable and a $4 per month subscription service. Amazon Halo stands out not for the lack of a screen, but rather its two “innovative” features: Body and Tone. The former uses computer vision, machine learning, and “a suite of algorithms that can generate your personalized 3D body model, BFP, and body model slider, a visual of how your body could change as you gain or lose body fat.” The latter uses machine learning to “analyze the positivity and energy of your voice — positivity is measured by how happy or sad you sound, and energy is how excited or tired you sound.”

Did Amazon learn nothing from the criticisms of its inaccurate facial recognition tech Rekognition? Actually, I think it learned a lot. This time, it’s not selling a problematic AI product to law enforcement (for now). Instead, it’s falling back on its tried and true strategy of going straight to the source: consumers.

It was impressive enough that Amazon single-handedly created the voice-activated smart speaker category with a surprise November 2014 announcement, ultimately getting the Echo into millions of homes. But the Echo is limited. Most variants don’t have a camera, and all versions are stationary. This is tough problem, especially given that consumers have (so far) shunned cameras in wearables (see Google Glass). Amazon’s solution? Use your existing smartphone to upload pictures of yourself in your underwear and buy a cheap band to record what you say wherever you are. In other words, surveillance capitalism under the guise of fitness.

Alexa, am I healthy?

I’ve long argued that the future of wearables is proactive health care. I’m extremely bullish on the idea that a device that can give you food recommendations, rest reminders, and exercise suggestions personalized specifically to what you need based on quantitative data measured from your body.

But this is not that. This is a steppingstone in the wrong direction. The same week that Fitbit announced Sense, which has more sensors than any other Fitbit device in an attempt to empower you with actionable health data, Amazon has unveiled the inherently flawed Halo.

While Fitbit backs up its health data with encouragement to work with health professionals, the only mentions of “doctor” in Amazon’s announcement is with respect to how Halo can replace them. Furthermore, Amazon offers no scientific evidence that applying AI to pictures and your voice can produce an “accurate body fat percentage” and “a more complete view of health and wellness.”

Never mind that Amazon does not cite any studies showing AI can determine your health from pictures and sound. Just like with Rekognition, it will take years for those to be conducted independently, if they ever show up at all. The scientific method takes time — time that Amazon can better spend giving users questionable insights and collecting valuable personal data.

Alexa, please tell Halo to stop recording everyone I talk to and in my vicinity.

Amazon is well aware of Halo’s potential privacy problems. The company knows that despite vowing not to use Fitbit data to target ads, Google’s $2.1 billion acquisition is facing a full EU antitrust probe. 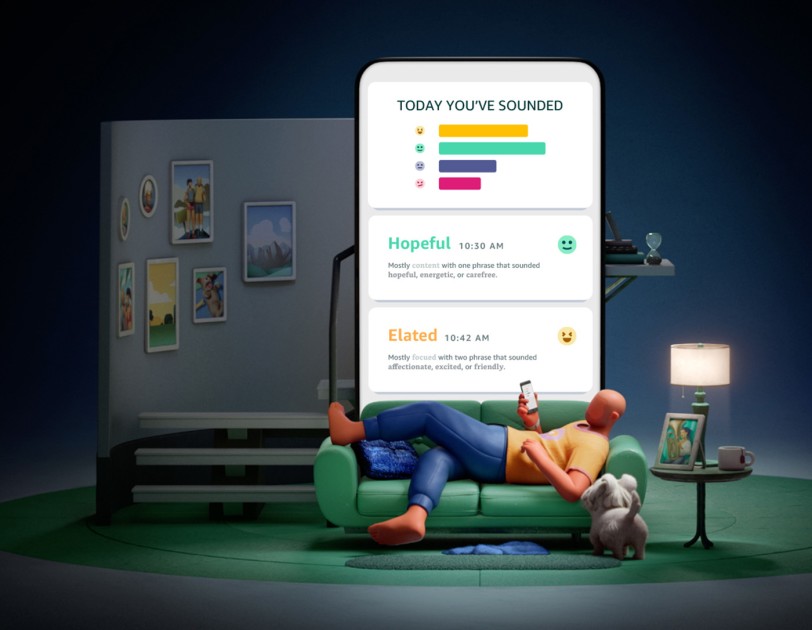 Amazon saw a potential data collection backlash coming from miles away. While the shortest section in the Halo press release is about privacy, it does link to a separate Amazon Halo Privacy page that addresses some key concerns right off the bat. I took the liberty of adding some notes:

That’s just the “quick summary” at the top of the page. Amazon does a decent job of explaining the things it wants to explain. It’s what’s missing on the page that is really telling. My biggest question: Why doesn’t Amazon promise not to sell my Halo data, or against my Halo data?

And therein lies the whole point of this exercise, no pun intended. We covered the surveillance part, so now let’s talk about the capitalism part. Amazon knows that health care is massively lucrative, especially in the fundamentally broken U.S. market. But the long-term revenue bet here isn’t in the $100 per device nor the $48 annual fee. It’s in ads.

In addition to dominating retail and cloud, Amazon has a small but steadily growing ads business. In Q2 2020, Amazon’s “other” revenue category that mainly covers its advertising business was up 41% to $4.22 billion.

In addition to knowing your purchase history, plus what you browse and search for, Amazon wouldn’t mind tracking your health. The company could easily sell you even more stuff if it thought it knew how your body was doing and how you were feeling. Letting advertisers target you with that data, à la Facebook and Google, couldn’t hurt.

ProBeat is a column in which Emil rants about whatever crosses him that week.

Related posts:
08/28/2020 Tech Comments Off on ProBeat: Amazon Halo is surveillance capitalism in a $100 fitness wearable
Hot News
Osmo launches self-paced kids math games for pandemic learning
Games Inbox: Are cross-gen PS5 games a bad idea?
CoD Warzone – U-Bahn-Glitch lässt euch im Gas überleben
Sendinblue raises $160 million to automate repetitive marketing tasks
Glassdoor launches employee reviews for diversity and inclusion practices at companies
Recent Posts
This website uses cookies to improve your user experience and to provide you with advertisements that are relevant to your interests. By continuing to browse the site you are agreeing to our use of cookies.Ok