A typical home robot today is a mindless disc-shaped vacuum cleaner — hardly the peak of innovation. While most roboticists have focused on automotive and military applications, the Toyota Research Institute (TRI) this week showed off its latest efforts for the home. Techniques like fleet learning and humans teaching robots using VR controllers aren’t new. We’ve seen TRI and other companies do those before. What we haven’t seen is an upside-down robot.

TRI’s “gantry robot” descends from your ceiling to perform such tasks as loading the dishwasher, wiping surfaces, and clearing clutter. It’s easily TRI’s most innovative concept yet. Because it is attached to an overhead framework, the robot can avoid bumping into furniture, loose objects, pets, and the humans it serves. When it’s done, the robot tucks itself back up and out of the way.

But as we discussed with Boston Dynamics CEO Robert Playter last month, robots need to solve mobility before we find their killer app. This was on my mind while watching TRI’s demos — I realized that the gantry robot is not truly mobile. Yes, it can move around in all sorts of directions, but it is limited to the room it’s set up in. This setup removes one impracticality only to create another. 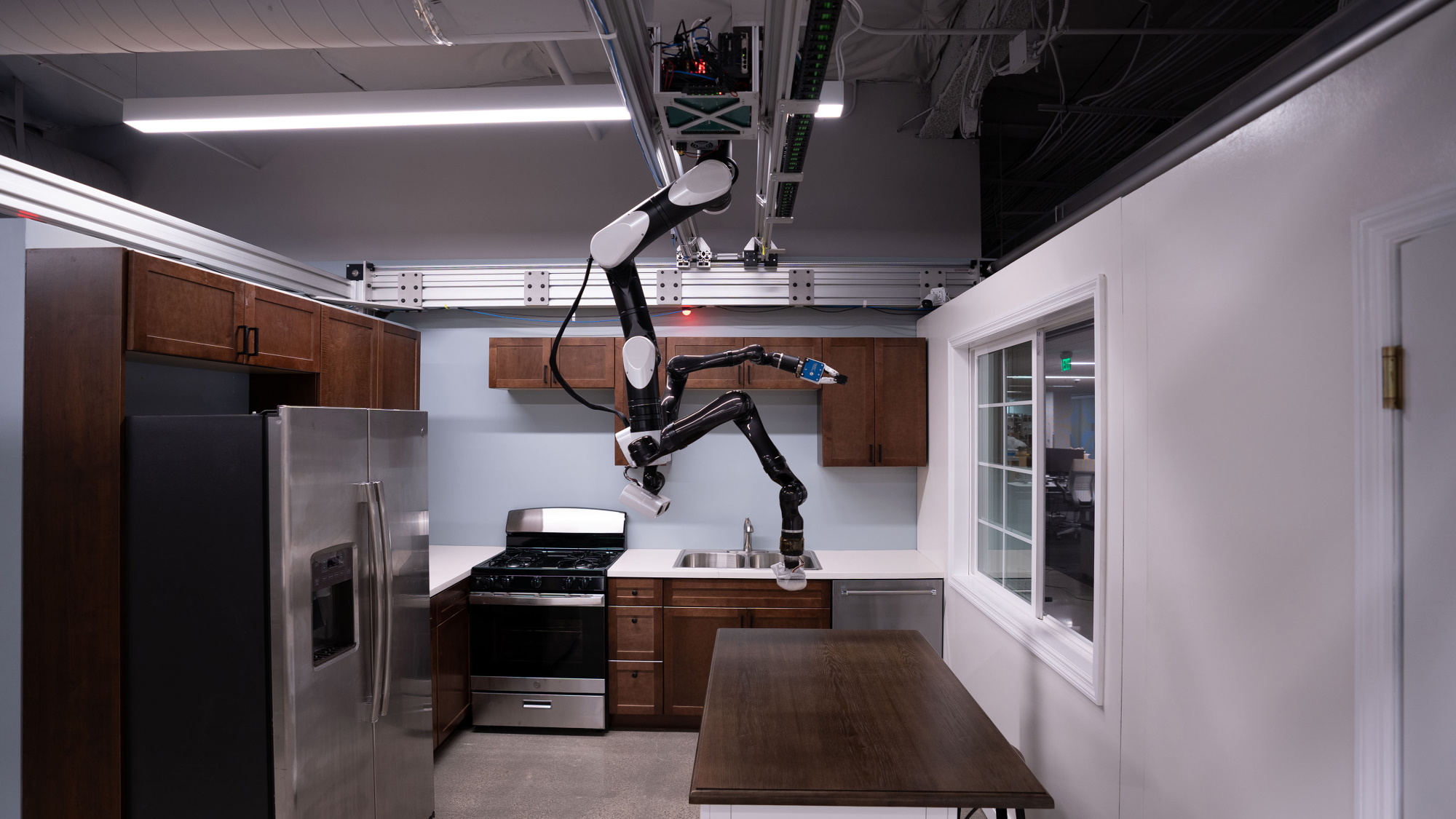 But it doesn’t have to be that way. In fact, the gantry robot is really one of TRI’s floor-based mobile robots plus an overhead mobility system. The team built a whole mock home with appliances, furniture, and surfaces while developing the robot. But the company also had to install ceiling beams that the robot needs to operate. You can see both robots in the following video, starting at around minute 23, when the floor robot cleans a television without breaking it:

TRI permanently attached the gantry robot to the ceiling because it would be too energy-intensive to fight gravity with every step. But this considerably limits its mobility. Even for very small homes where such a robot might make sense, installation would still be a huge ask. This isn’t a robot you can just order online. A potential product would likely need to straddle both — what if the robot could be mobile on the ground and then attach itself to the ceiling as needed? 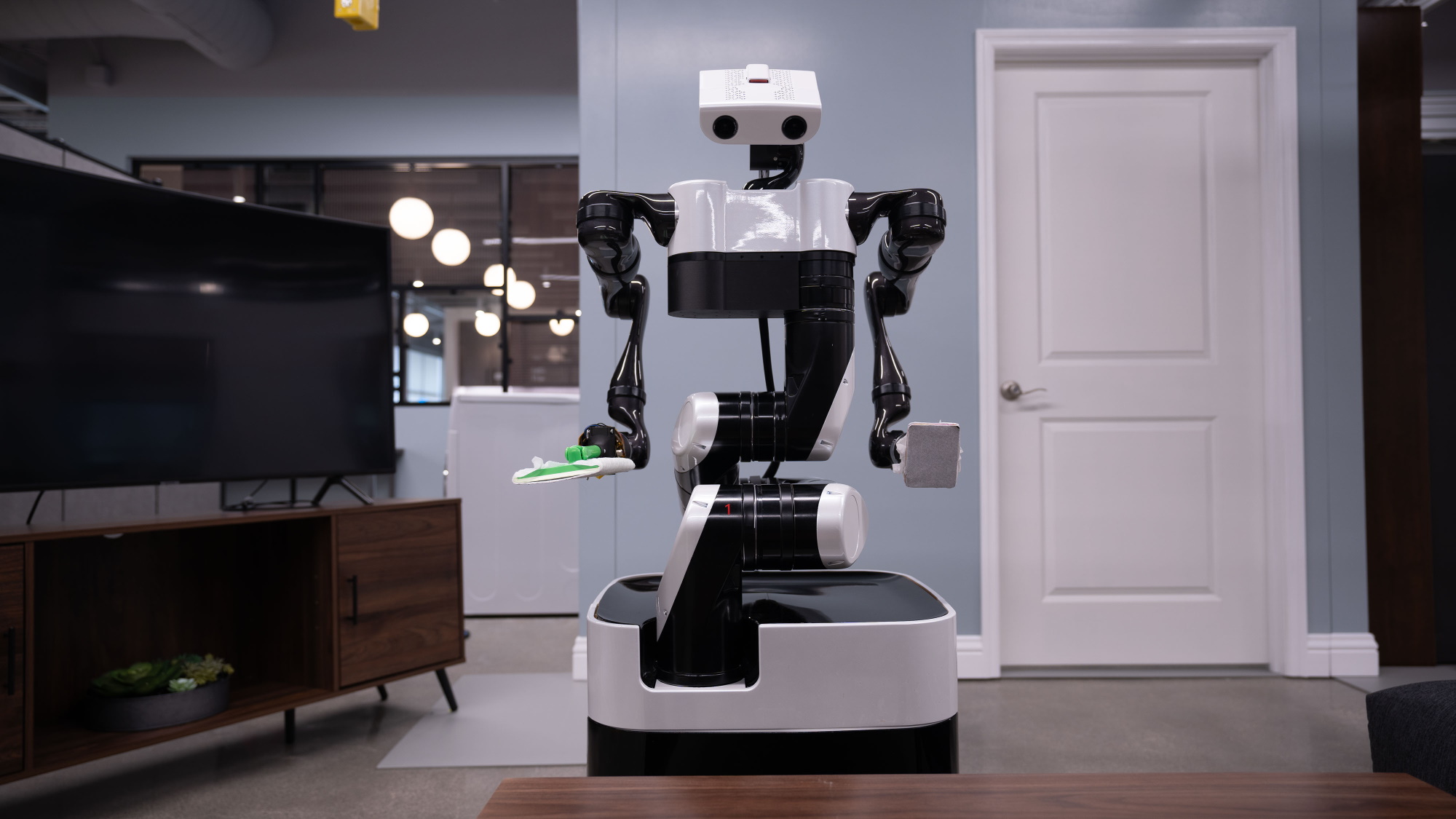 “As you can see, we’re tackling some really huge technical challenges,” TRI VP Max Bajracharya said. “But those challenges are rooted in real-world needs and the way Toyota can have a positive impact on society.”

I like TRI’s ceiling concept, especially for small homes like those in Japan where there isn’t room for a robot to “live” on the floor. But I can’t see the gantry robot evolving beyond a concept.

And that’s OK. Robots that can do more than just bump into things in our homes will require innovative research just like this.

ProBeat is a column in which Emil rants about whatever crosses him that week.

Related posts:
10/02/2020 Tech Comments Off on ProBeat: Toyota’s upside-down robot is innovative and impractical
Hot News
Magento 2 Email Settings 2020: Step-by-Step Technique
According To You, Slime Climb Is The Best Fall Guys Round
Call Of Duty Warzone & Modern Warfare Halloween event adds Saw and Zombie Royale
Square Enix Unveils Balan Wonderworld's Opening Movie
Vampire: The Masquerade – Bloodlines 2 Senior Narrative Designer Leaves Game
Recent Posts
This website uses cookies to improve your user experience and to provide you with advertisements that are relevant to your interests. By continuing to browse the site you are agreeing to our use of cookies.Ok