While Digi-Capital’s AR/VR Analytics Platform tracked over $4 billion AR/VR investment last year, virtual and augmented reality investment dropped in Q4 2019 and Q1 2020 in terms of both deal volume (i.e. number of deals) and deal value (i.e. dollars invested). The first quarter of this year saw AR/VR investment volume (again, number of deals) at a quarterly level last seen back in 2013. In the context of COVID-19’s impact on all startup investment (not just AR/VR), this looks like it might be the start of at least a medium-term trend.

It is too early to tell whether the peaks of AR and VR investment from recent years might return after the coronavirus crisis has reached a resolution. What could be needed for that to happen is a VC catalyst on the scale of the Facebook/Oculus deal, which in many ways sparked the current virtual and augmented reality market. A potential catalyst could be Apple entering the smartglasses market in late 2022, but as previously discussed only Tim Cook and his inner circle know if and when that might happen. 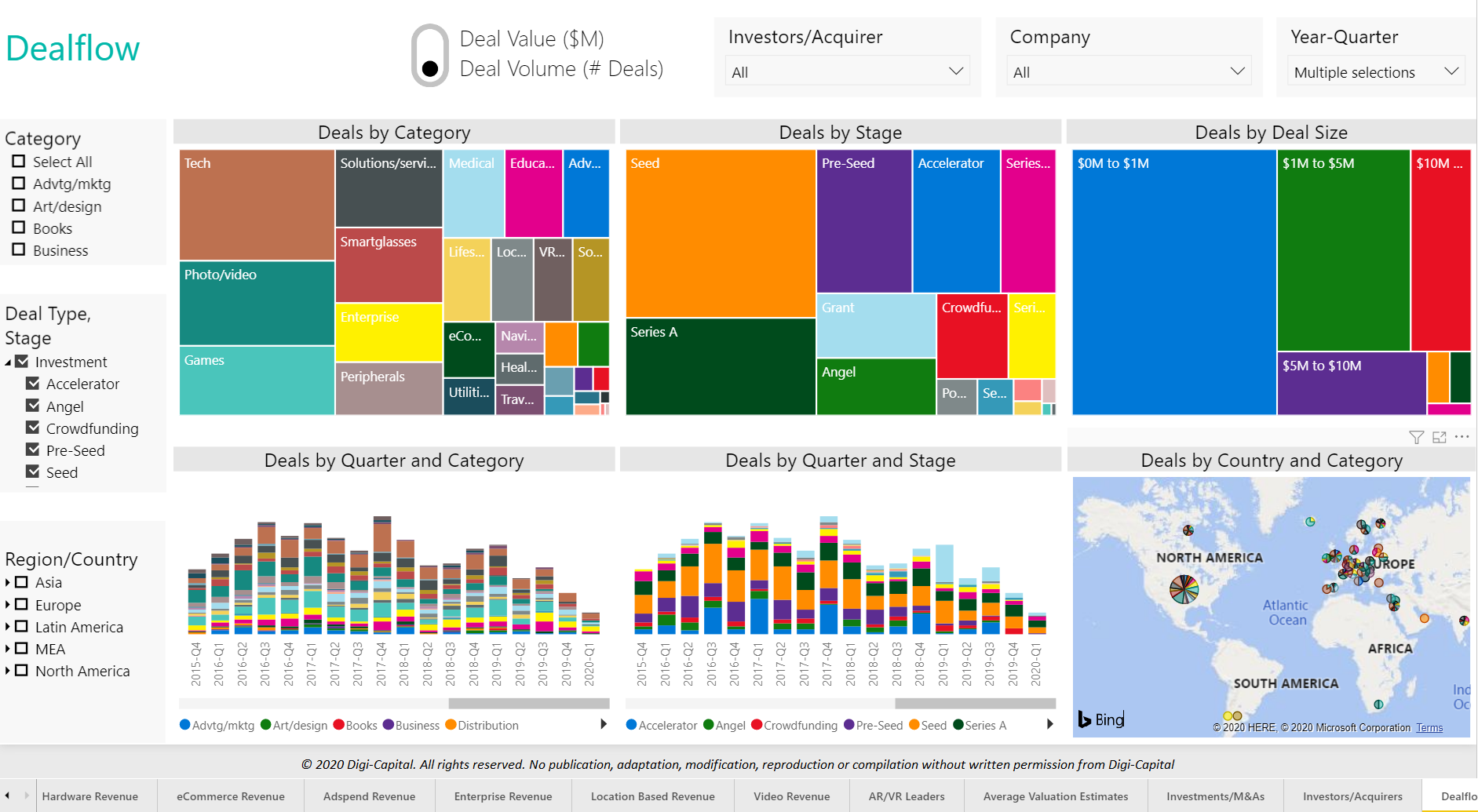 AR/VR investment volume (number of deals) declined significantly in the last 2 quarters. Total quarterly investment volume in Q1 2020 was at a similar level back in Q4 2013, before VC interest in the current wave of AR/VR was sparked by Facebook acquiring Oculus. Categories with the highest volume of deals in the last 12 months to Q1 2020 were AR/VR tech, education, games, enterprise, medical and smartglasses. All other categories had fewer deals in the last 12 months. 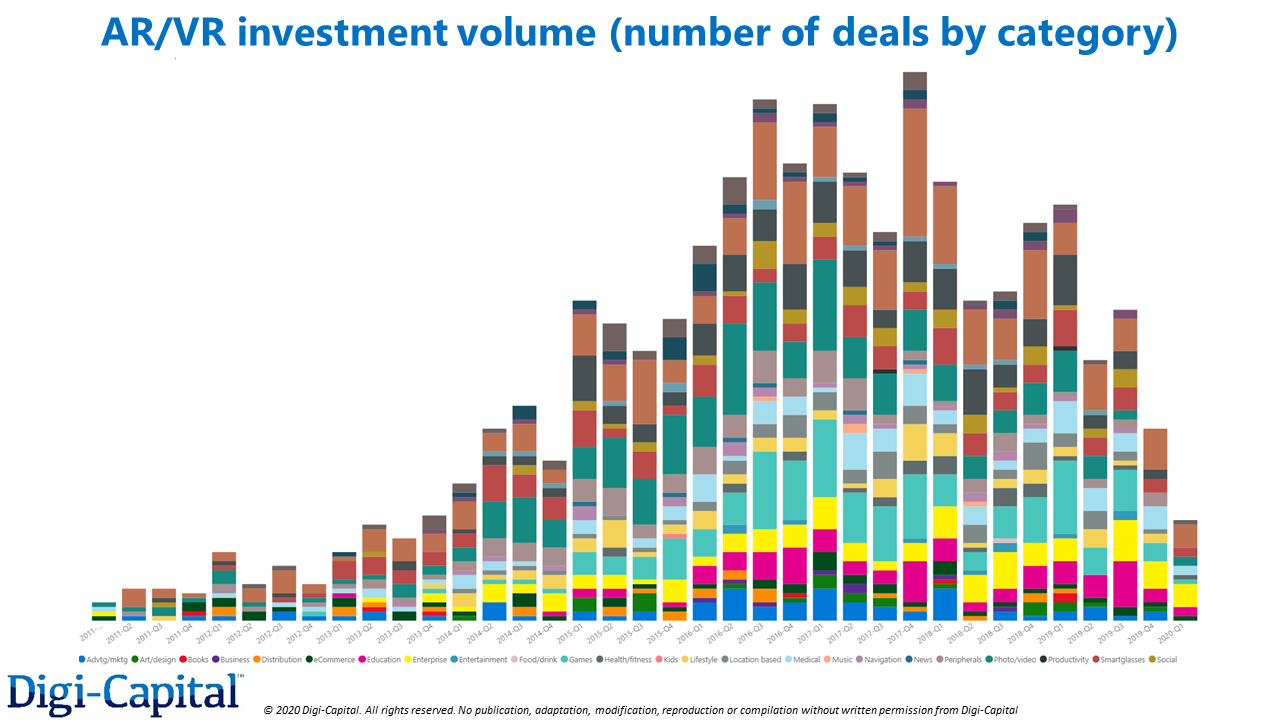 The largest number of investments by stage in the last 12 months to Q1 2020 in order were Seed, Series A, Grants, Series B and Accelerator. All other stages saw fewer deals. 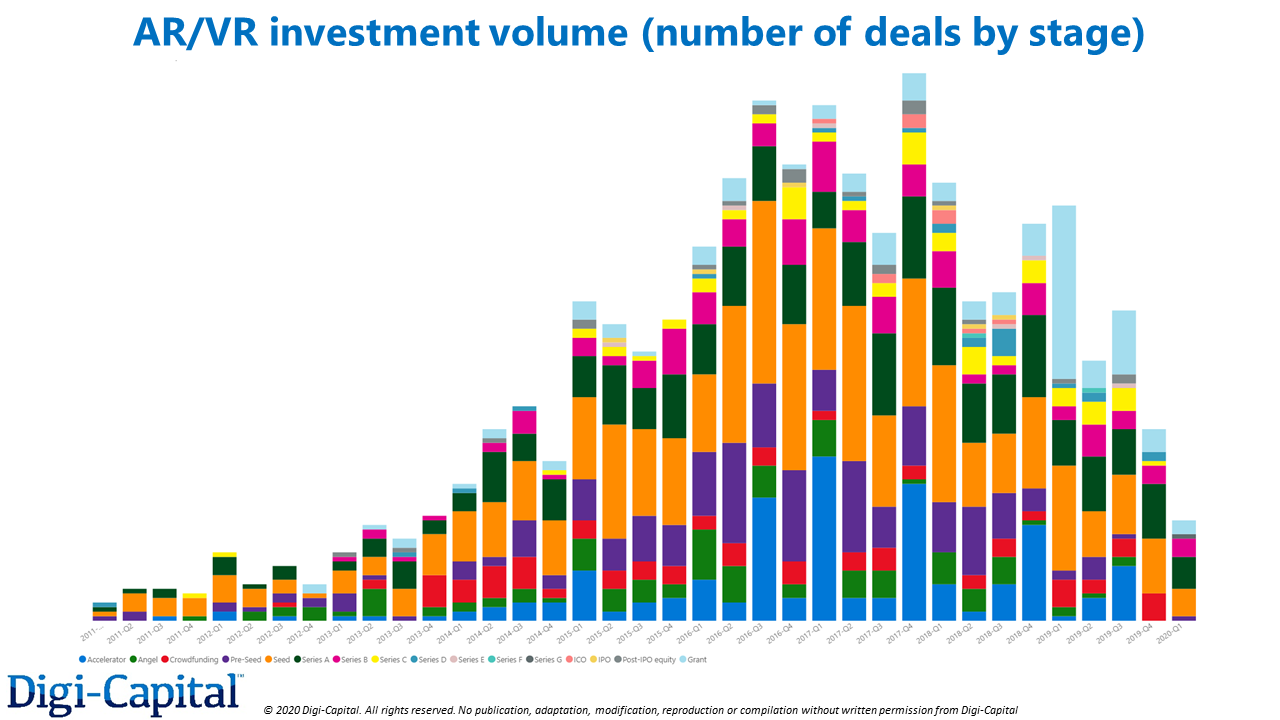 As above, AR/VR investment value (dollars invested) dropped significantly in the last 2 quarters, with Q1 at a level similar to Q3 2015. Again, the impact of COVID-19 on the wider tech investment market appears to indicate at least a medium-term trend. AR/VR tech and social categories each raised the largest amounts in the last 12 months to Q1 2020, with smartglasses, location based entertainment, games, photo/video and lifestyle categories also significant. Other categories also saw investment, but at a lower level. 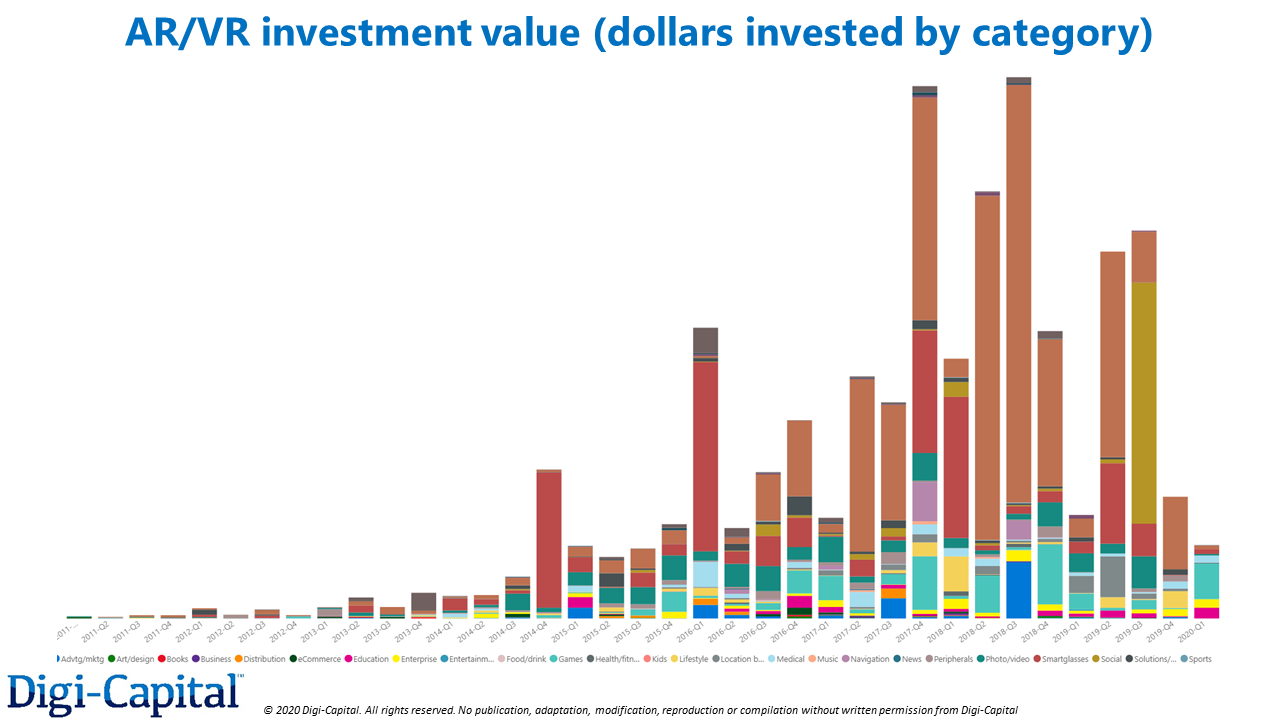 Apart from post-IPO equity raised by Snap, the highest value investment stages for AR/VR in the last 12 months to Q1 2020 were in order Series F, Series B, Series A, Series C and Series D. All other stages raised lower amounts. 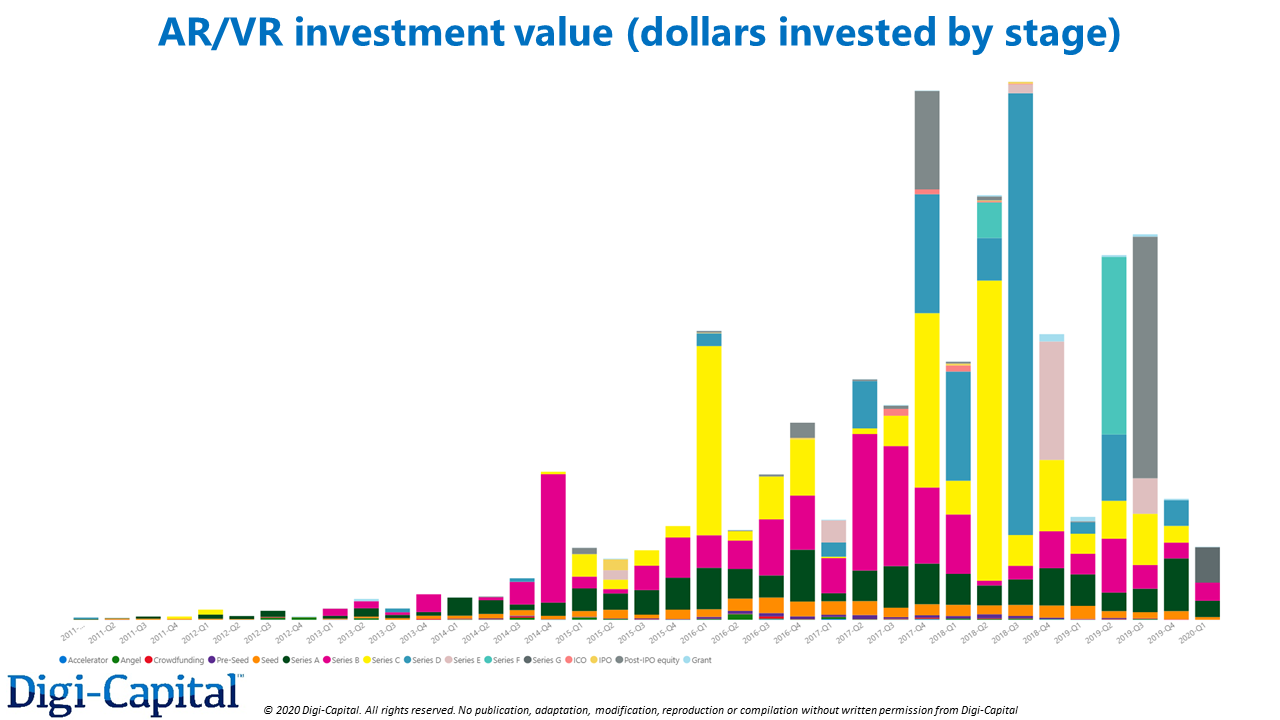 Geographically, the US and China continued to dominate AR/VR investment over the last 12 months to Q1 2020 as they have for some time. These were followed by Israel, the UK and Canada. All other countries produced less investment. 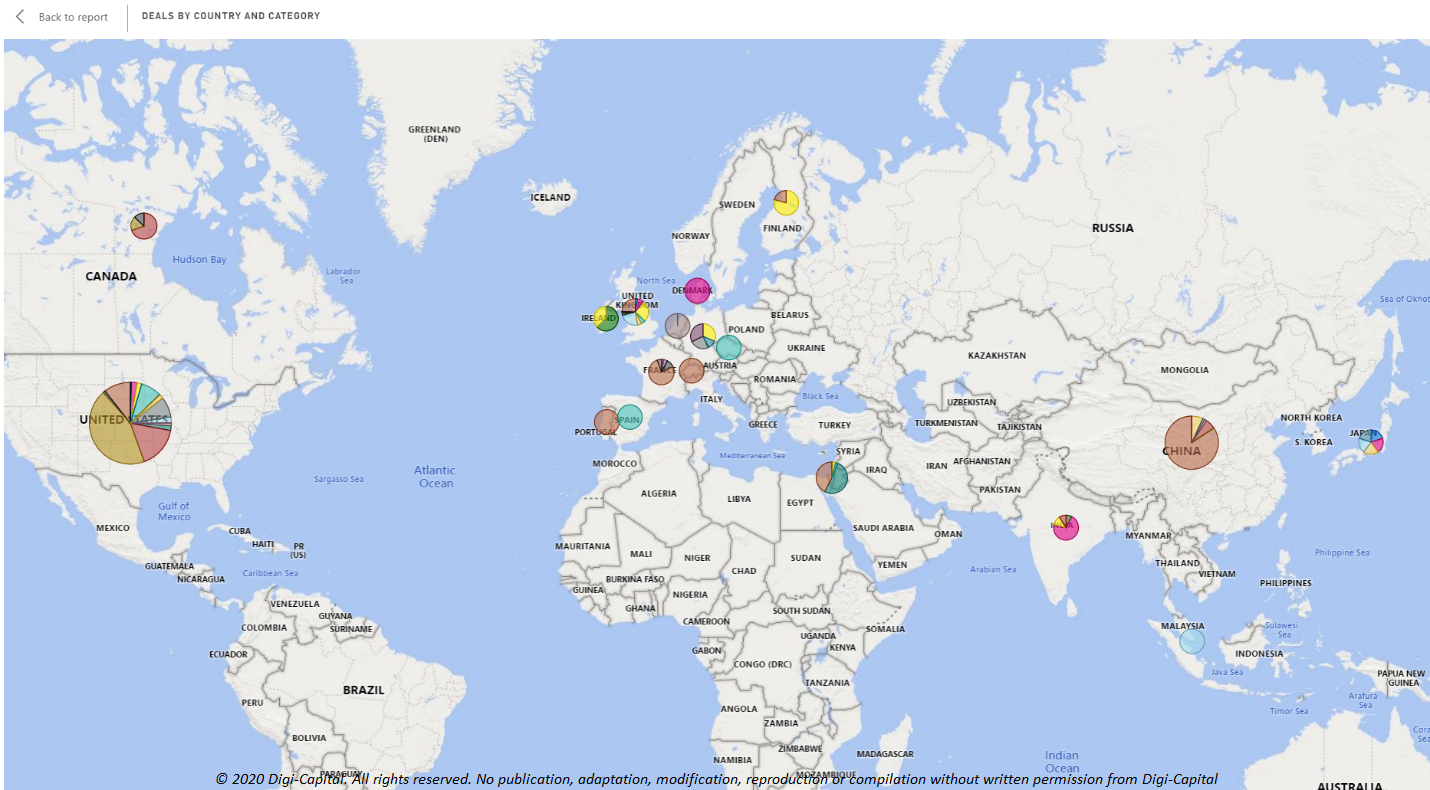 AR/VR has seen relatively low M&A volume (i.e. number of deals) compared to other tech sectors due to the early stage of the market. Apart from outliers like Facebook/Oculus, quarterly AR/VR M&A value (i.e. dollars paid to acquire companies) has generally remained in the tens to hundreds of millions of dollars per quarter. Compared to other tech markets, this highlights the limited amount of M&A for AR/VR so far. While this could change if there is an inflection point in coming years, there isn’t an obvious catalyst to drive large-scale M&A in the medium term. 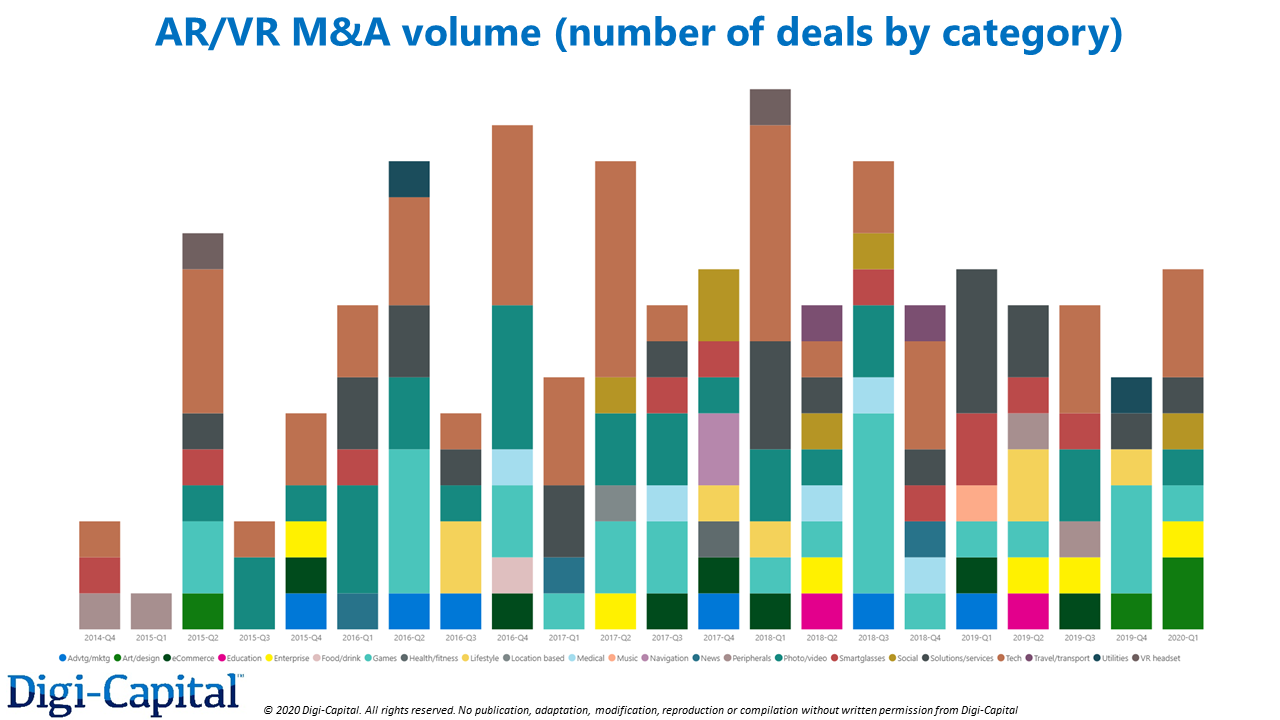 In the current augmented and virtual reality market, startups might be most focused on short term revenue generation and managing burn rates through 2020/2021. Leveraging VC investment to accelerate growth is challenging in normal times, but these aren’t normal times (again, not just for AR/VR). Hopefully the strongest startups might find a way through to the other side.

Related posts:
05/09/2020 VR Comments Off on Virtual and augmented reality investment at 2013 levels in first quarter
Hot News
Sakurai Says To Wait "Just A Bit Longer" For His Next Announcement
Destroy All Humans 2 Remake In The Works Under A Codename
Mighty Doom Is A Free To Play Mobile Game Based On Bethesda’s Popular Franchise
Nintendo Will Focus More On Original IP’s In The Future
6 Tips For A Pokemon Platinum Nuzlocke
Recent Posts